A game of chess begins in the initial position opposite, white plays the first move then the players take turns moving one of their pieces each time (two in the case of a castling). Each piece moves in a specific way, it is not possible to play on a square occupied by a piece from your own camp. When an opponent’s piece is on the arrival square of the piece being played, it is captured and removed from the chessboard. Earning materials (coins) is one way to win the game, but not always enough to achieve it.

There are special chess rules related to the movement of certain pieces: castling, which allows the simultaneous movement of the king and one of the towers; the taking in passing, which allows a particular capture of the pawns; and pawns promotion, which turns them into a centerpiece of one’s choice (except the king) when they reach the last row of the chessboard game.

When a king is threatened with capture, he is said to be in check. If this threat is unstoppable (we can try to counter the threat by moving the king, by interposing a piece or by capturing the attacking piece) we say that there is checkmate and the game ends with the victory of the player who mate. It is forbidden to check your own king or to pass him over a check line during castling. It is also forbidden to castling when the king is in check on his starting square. If this happens (inadvertently between beginners) we have to take it back.

If a side can no longer play any legal move (this happens for example with a single king and all of his pawns blocked) and if his king is not in check, then we say that it is a question of a pat position. Whatever equipment the opposing camp has, the game is declared void, that is to say without a winner.

The object of the game is therefore to inflict a checkmate on his opponent. The term checkmate comes from šāh māta (in Persian, or aš-šāh māta الشّاهُ ماتَ in Arabic), “the king is dead”, to indicate the defeat of the king. The word šāh (“king” in Persian) is the origin of the word chess and the name of chess in a large number of languages.

To learn the movements of the pieces in a fun way you can play Chess Move.

Each piece can move at the choice of the player on one of the spaces marked with a cross. Apart from the pawn, they capture an opposing piece that is in their path, without being able to go beyond. With the exception of the capture in passing, the capturing piece takes the place of the captured piece, the latter being permanently removed from the chessboard.

The bishop, the rook, and the queen are long-range pieces (or line pieces):

they can move along lines. Each camp has two bishops: they always move on squares of the same color, diagonally; each camp therefore has a bishop of white squares, and a bishop of black squares.

Castling consists of moving the king and one of the towers in a single move. There are two ways to castling:

The following conditions are necessary to be able to castling:

The last rule can be explained as follows: the king plays two moves in one; for example, in castling, the King goes to f1, then to g1. So, according to the chess rules, he cannot check on the intermediate square f1, nor on the g1 square (the king does not have the right to check himself).
Since the king and the rook must never have played, each side can only cast one castling in a game, whether it is a small or a large castling.
The tower, on the other hand, can be attacked by an opponent’s piece: the a1 square (a8 for black) during the big castling, and h1 (h8 for the black) during the small castling can be controlled by an opponent’s piece. During castling, square b1 (b8 for black) can also be controlled by an opponent’s piece, since the king does not go there.

The taking in passing can occur when a side has just played a pawn of two squares (this is possible during a very first movement of the pawn) and, in doing so, avoids confrontation with an opposing pawn. In the example opposite, white playing a2-a4 avoids the encounter between white pawn a2 and black pawn b4.

However, the rule for moving a pawn by two squares is interpreted as follows: the pawn plays two moves in one, first a one-square move (a2-a3 in our example), then a second move of the same pawn in a square (a3-a4). Under these conditions the opposing camp can consider that after the first move it is itself entitled to capture the moved pawn: this is what it effectively does thanks to the catch in passing, b4xa3 in the example.

Consistently, the pawn captures on the first square, that is to say a3 in our example, and the captured pawn is removed from the board.

taking in passing is not compulsory;
the camp which takes in passing must do so immediately, with the following blow this possibility disappears;
the take in passing is noted (optionally) by adding e.p. after the fact, example: bxa3 e.p.

The pat is a special situation in which a draft side cannot play any legal move, without its king being in check. The game ends immediately and is declared a draw, that is to say without a winner.

In the diagram opposite, white in line does not have any legal move because one does not have the right to check voluntarily, and the white pawn is blocked. Since there is no check, it is a pat and the game is declared a draw. 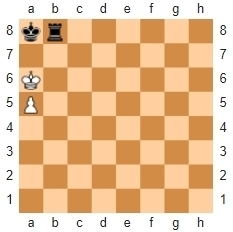 The underpromotion consists, during the promotion, in choosing a piece other than the queen, which is normally privileged because it is the most powerful piece in the game. It is sometimes useful as in the diagram opposite, in indeed we realize that after playing f8 = D, the black king has no legal move. Black, having no other piece to play, is dead and the game is a draw, although white has an extra queen. 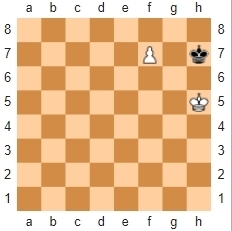 As a result, white chooses to under-promote in round: f8 = T, black is not pat because they can play Kg7 and white wins this easy theoretical final. If White chose to under-promote their pawn as a bishop or a knight the game would be a draw because it is not possible to checkmate with R + F against R alone, or R + C against R alone.

The games can end with a victory for one side, associated with a defeat for the other side. Several cases can arise:

The games can end with a draw, that is to say without a winner. Several cases can arise: